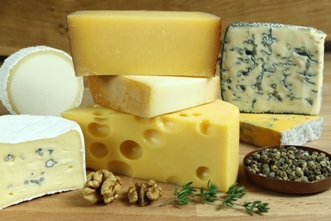 Cheese is amongst the most nutritious and tasty of foods. Cheddar cheese is an ancient English cheese that was originally produced only in the Somerset village of Cheddar. Today many areas throughout the world produce cheddar cheese.

Red Leicester and Double Gloucester are traditional English cheeses and are coloured red and orange, they are both similar in texture to cheddar cheese.

Soft Cheeses can be supplied in 2 kg quantities. Cottage cheese is a cheese curd product with a mild flavour.

Processed and grated burger and Cheddar slices are available, as is grated cheese produced from both mature and mild cheddar.

Grated Mozzarella and Parmesan are available either as a powder or in the form of shavings.

These cheeses are produced in many countries throughout Europe and also most areas of the United Kingdon.

Many cheese manufacturers produce small quantities of speciality cheese and compete with better known cheeses. They are often preferred by local restauranteurs who are only too pleased to support local producers.

Most of the popular speciality cheeses are stocked and available for delivery within 24 hours, however with new cheeses constantly being offered by producers and over 300 different varieties to choose from it is impossible to stock all but the most commonly used. Many are produced as vegetarian cheese such as goat cheese and mozzarella.

* 48 hours advanced notice required to order.
Other cheeses are available on request.